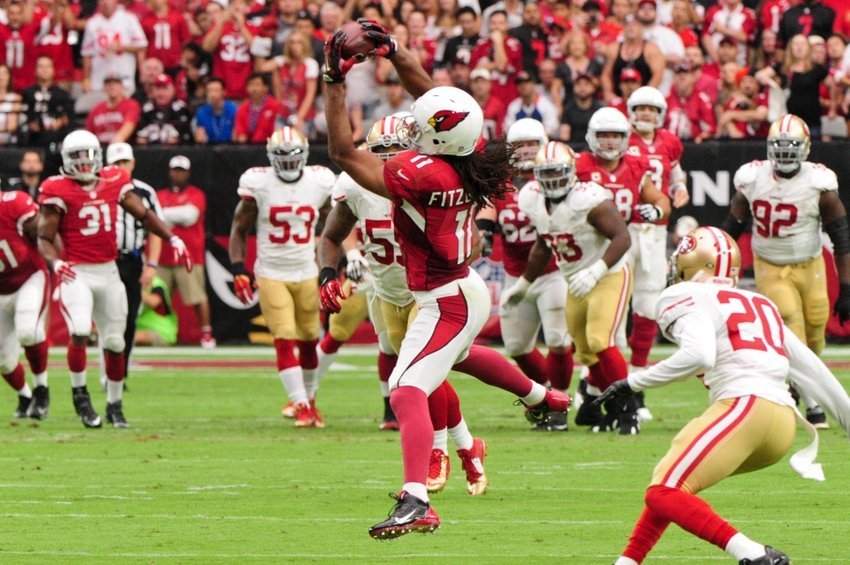 The Cardinals haven’t scored in the first quarter this season. Wonder how much longer that sentence will remain true. The Cardinals were a slow-starting team the past two years, too, but they tended to bust out in the second and third quarters. That’s not happening this year, and it will be more difficult to do with Drew Stanton starting at quarterback in place of Carson Palmer. The Cardinals say opponents are playing them differently this year. They are seeing more zone coverage, and safeties are staying deep more often.

The idea is to take away the deep pass. It’s worked but Palmer also has underthrown a few deep passes. Keeping safeties deep presents opportunities, too. It should give running back David Johnson more room. It should open shallower routes, especially to Larry Fitzgerald. What would help is if the Cardinals’ best players did something extraordinary. Johnson’s the only who has made something happen after contact. The Cardinals desperately need Fitzgerald to break a run after a catch, or Michael Floyd, or anyone. Stanton hasn’t started since 2014, and he’s going to need more help than Palmer requires. That means the special teams playing better to help field position.

The Cardinals did an excellent job of controlling Rams running back Todd Gurley last week, at least as a runner. They will need to do the same against Carlos Hyde and Shaun Draughn. Quarterback Blaine Gabbert will keep the ball some on options. The Bills’ Tyrod Taylor hurt the Cardinals on those plays two weeks ago. The Cardinals must be more disciplined, especially their outside linebackers. Tyrann Mathieu is expected to move to his old spot, playing closer to the line of scrimmage. He played a deep traditional safety role in the first month because he wasn’t fully recovered from ACL surgery. But Mathieu wants his old spot back; he’s frustrated by losing and thinks he can make more of an impact. It can’t hurt, especially since Tyvon Branch, the nickel corner in the first month, is now on injured reserve with a hernia. The defense needs to be dominant, given the situation on offense. Setting up field position with turnovers would be helpful. So will stopping the 49ers on third down. That’s been a problem all season for the Cardinals.

Almost every phrase needs to play better. The Cardinals are losing field position with poor punting and coverage units, and field position will be of great importance Thursday night. The 49ers will try to make the Cardinals grind out long drives, and the special teams need to help with field position. John Brown has shown he can be a dangerous punt returner, which should help. With Andre Ellington moving into the backup running back role, receiver Brittan Golden will return kicks. That could be an upgrade.

Cardinals must find a way to win this game. Yes, its more than likely they will be without QB Carson Palmer. But he hasn’t been himself this year and neither have the Cardinals.

The 49ers have no power play on offense, other than running back Carlos Hyde which Arizona have proven they can stop the run. Look for Johnson & Fitzgerald to step up for Arizona and they’ll cover the spread on a less than exciting night of Thursday Night Football.