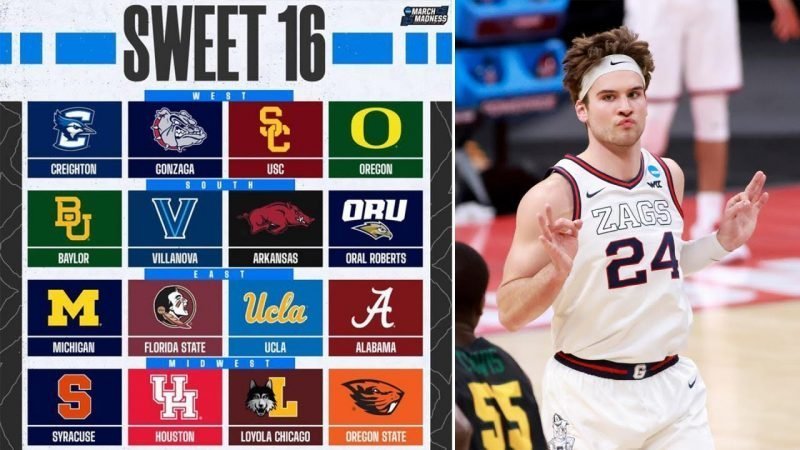 Best Bets: We are back in the lab with some more college basketball from this INSANE March Madness. We dont have a best bet in just one game… or two games… we have a best bet for you in ALL EIGHT GAMES for the Sweet 16.

Starting off with a Loyola Chicago team that upset the #1 seed Illinois in the Midwest region and is currently sitting at the 6th best odds to win the national championship, going up against an Oregon State team that had less than a 5% chance to even make the tournament going into the conference tournaments. Starting with Loyola Chicago where they are starred by 250 pound center, Cameron Lutwig who is currently shooting 58% from the field and averaging 15 points a game. Lutwig’s scoring ability has been opening up the 3-point shot all year for the Ramblers as they have two shooters (Keith Clemons and Branden Norris) shooting 46.4% & 41.1% from behind the arc while they are shooting 37% as a team from distance. Oregon St. might play as one of the slowest teams in the country, but have managed to be 17-11 O/U this season, mainly due to their incredible efficiency. Oregon St. comes into this matchup hitting the over in 4 of their last 5 games and are 13-3 O/U in games where they are 7-point underdogs or less. The Beavers have been on an impressive tear as of late to make it to the tournament and have score 70+ in all of their last five games. Our model is saying that this line is way too low for the O/U as it is predicting a 135 total score.

With our second of eight best bets we have #5 seed Villanova vs #1 seed Baylor in the south region, which is two of the most explosive offenses in all of college basketball. Baylor scores 122.8 points per 100 possessions (3rd in college basketball) and Villanova scores 119.8 points per 100 possessions (6th in college basketball) while Baylor ranks 37th in defensive efficiency and Villanova ranks 72nd. Combined these two teams are 27-19 O/U while Baylor is on a 9-1 over run with their only under coming against #16 seed Hartford. Villanova has let their opponents shoot a lot of 3s this season and they are making them at a 34.9% rate which won’t matchup well against one of the best 3 point shooting team in the country. On the offensive side of the ball for Villanova, they have been able to spread the floor as good as anyone in the country and rank 4th out of power 5 teams in 3 pointers attempted this season (26.3 3PA). Expect this game to be played at Baylor’s pace and a lot of 3s to be flying, as our model shows this game’s total scor being 154.

The 3rd game of the Sweet 16 is the Cinderella story 15 seeded Oral Roberts vs the #3 seed Arkansas in the south division. Arkansas comes into this matchup as one of the two double digit favorites in these Sweet 16 matchups as they are 11-point favorites. This line seems reasonable as these two teams actually played earlier this season when Arkansas won by 11 points even with Arkansas being down early in the second-half. In their first matchup, Arkansas struggled from shooting outside (4-24 from 3) and still managed to win by 11. The size differential will play a huge part in this game as Arkansas absolutely dominated the glass against an Oral Roberts team that ranks in the 15% percentile in offensive & defensive rebounding efficiency. In the games in this tournament, Arkansas hasn’t managed to stay in them by their shooting from outside (which is what Oral Roberts is best at defending), but rather their team crashing the offensive glass and getting second chance points. Back the Razorbacks who are 18-9 ATS this season to control the game down low in what could be another high scoring affair.

The 4th, but final game of the Saturday Sweet 16 slate brings us the #11 seed Syracuse vs the #2 seed Houston in the Midwest region. When watching Syracuse in this tournament, you wouldn’t think that team should be an 11 seed because they surely haven’t been playing like it. They have already handled #6 seed San Diego St. and #3 seed West Virginia with the help of Buddy Boeheim who, in their last 4 games, has scored 25+ and made 5+ 3-pointers in every game. As a team in those 4 games, Syracuse has shot on outstanding 45.9% from deep. Houston has had a lot of games this season where they have been massive favorites, but in the last 3 games where they have been 8 point favorites or less they are 0-3 and they are facing a Syracuse team now that has startled teams with their 2-3 zone and have covered all 6 of their last 6 games. Our model has this game being a lot closer than the spread shows and its never a bad idea to back Jim Boeheim in March.

Jumping right into the Sunday slate where we see the 2nd double digit favorite in the #1 seed Gonzaga go up against the #5 seed Creighton in the West region. Neither one of these teams have phenomenal ATS records and we have only seen Creighton as an underdog 3 times this season (2-1 ATS). Creighton is going to be undersized in this matchup, like they are in many of their matchups, while they start 6’7″ Christian Bishop at center, but even being undersized, Creighton still ranks top 10 in all of college basketball in 2-point field goal efficiency. Creighton plays excellent defense at guarding the perimeter, but the height differential could get them beat down low has Drew Timme put on an exceptional performance in their last outing against Oklahoma by dropping 30 points. Creighton’s defense could slow Gonzaga’s momentum down starting with the perimeter and forcing turnovers, much like they did in their blowout victory in the round of 32 against Ohio. Our model has this being a high scoring affair, but Creighton covering in a 10 point loss.

The 6th Sweet 16 game brings us #4 seed Florida St. meeting #1 seed, and the last of 9 Big Ten teams remaining, Michigan Wolverines in the East region. Michigan comes into this game with the 2nd best ATS record among teams still remaining in the tournament at 18-8 and are 6-1 this season when they are favored by 5 points or less while Florida St is entering this game with a 12-10-2 ATS record. This Michigan team is led by Freshman forward Hunter Dickerson with 14 PPG and 7.2 RPG which has helped them tremendously since star player Isaiah Livers went down with a season-ending injury in the Big 10 tournament. This season, Michigan ranks 3rd in adjusted efficiency margin (+29.28) only trailing the 2 remaining 1 seeds in the tournament, Gonzaga and Baylor. They are well balanced across all statistics, but the one that standout the most to me is how effective Michigan is with the ball in their hands compared to Florida St. Michigan ranks top 5 in the power 5 conference in opponent steals per game, whereas we just saw Florida St. turn the ball over 15 times in their game against Colorado. Michigan plays at a much larger pace than Florida St. and to add Michigan’s top 10 defense into that mix, we could see a lot of transition offensive points for the Wolverines.

For the 7th game of the Sweet 16, we have the #11 seed UCLA facing the #2 seed Alabama. Much like Syracuse in this tournament (who is also an 11 seed), UCLA has been explosive on both sides of the ball, but they have their toughest matchup yet against an Alabama team that shoots more 3s than any team in the country. That doesn’t scare UCLA at all though as they have held their opponents in the two tournament games to an astounding 19.4% (7-36) from behind the arc while also forcing 10 turnovers a game.  Alabama comes into this matchup 4-6-1 ATS against non-conference opponents and UCLA is on a roll going 4-1 ATS in their last 5 games with their only loss ATS coming by a hook. UCLA has not been this big of an underdog all season and our model actually shows them winning this game outright, and they very well could if they keep their 3-point shooting up (43% in the tournament), and guard the perimeter like they have but we are taking the safer route and rolling with UCLA’s spread.

The 8th and final game of the Sweet 16 contains #7 seed Oregon going up against #6 seed USC in a rematch from February 22nd where we saw USC hold Oregon to 58 points, which is the lowest Oregon has scored all season, and USC won by 14 points. We saw a different Oregon team play in their last outing when they faced the fastest paced team in the country, the Iowa Hawkeyes. The Iowa Hawkeyes have the 75th ranked defense. The USC Trojans have the 5th ranked defense, and as we already saw this season, is a great matchup against for USC. USC also comes into this game with the 15th ranked offense matching up against Oregon’s 52nd ranked defense. Don’t expect that same Oregon offense we saw in their last game to come out against USC. This season, USC is 20-4 straight up when they are favored, while, with a small sample size, Oregon is 1-2 straight up as an underdog. Our model has USC winning this game by 4 points and we are backing USC to defeat Oregon in a Pac-12 rematch of the top 2 Pac-12 teams in the regular season.

Introducing – Scorecast powered by AWS The data is in! Our Computer simulated genius. 4 years in the making, testing, twisting and perfecting it is with great pride and confidence we introduce you to Scorecast. Much like our newborn baby, she’s been spoon fed every possible piece of statistical data imaginable. Tried and tested algorithms and the most in depth weekly filters leaves nothing to chance. Human emotion eliminated, prepare to test drive the best data driven analysis in sports betting! Every NCAABB Matchup updated daily with up to the minute data gives Sportsbet Magazine subscribers the best advantage for NCAABB score predictions, NCAABB Best Bets and NCAABB sports betting. 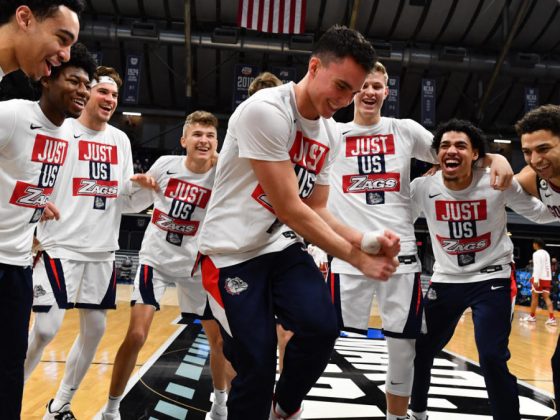 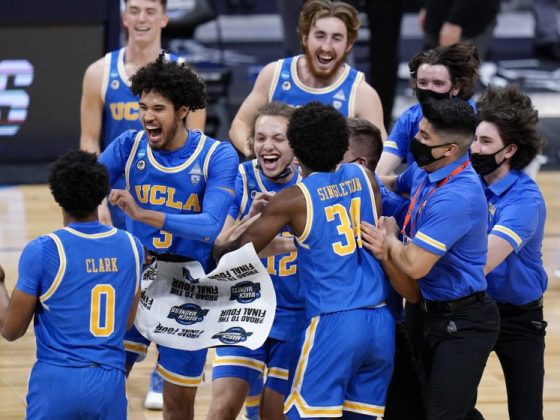