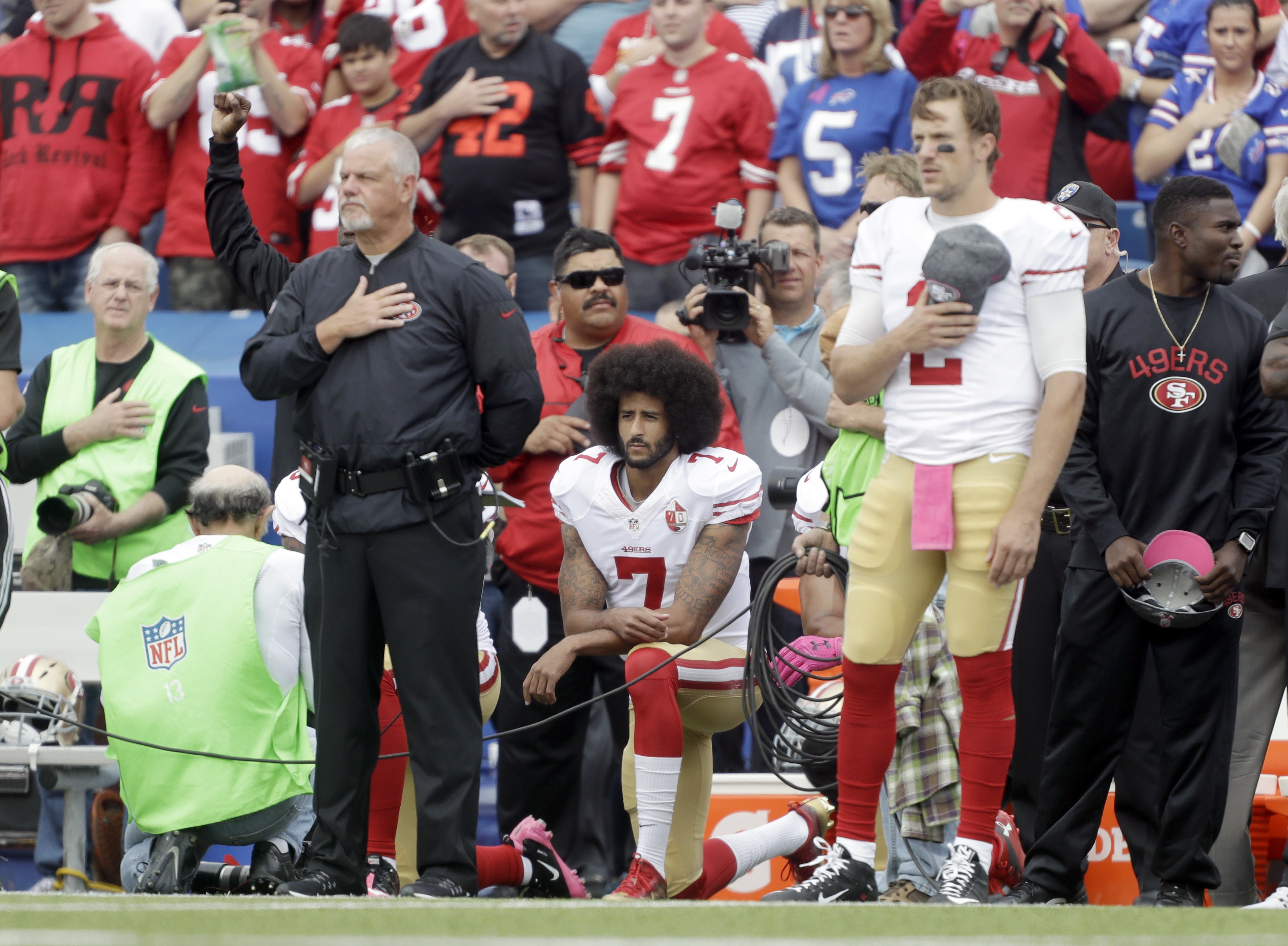 Last Season, San Francisco 49ers quarterback Colin Kaepernick started a widespread movement to bring attention to police brutality and the systematic oppression of minorities in the United States by refusing to stand for the national anthem. Simultaneously, he launched himself into the center of a polarizing conversation over the state of race relations in the country, and the meaning of patriotism.

Fast forward to 2017 and Colin Kaepernick is now unemployed and not even signed as a backup QB in the NFL.

To be clear Kaepernick managed the 17th-best quarterback rating last season among starters while coming back from injury. His touchdown percentage was 13th best, better than Washington’s Kirk Cousins, who wound up in the Pro Bowl and with a new franchise-tag contract worth $24 million this season. His interception percentage was sixth, just behind Aaron Rodgers and just ahead of MVP Matt Ryan. And Kaepernick did all of that on a team that was abysmal because of disarray in its ownership and front office, as well as its sidelines.

Kaepernick, not yet 30, was not without failure on the field. His yards per attempted pass was in the bottom third of the league, but so was Eli Manning’s. He was one of just six starting quarterbacks not to achieve at least a 60 percent completion rate. Yet, 37-year-old Josh McCown, who completed just 54.5 percent of his passes last season and posted an anemic passer rating of 72.3, was awarded a new contract earlier this week by the New York Jets.

Truth is, Kaepernick’s numbers have nothing to do with what entering Thursday became his 4th week of unemployment in the league. However what has everything to do with his predicament is optics, the same one that ultimately derailed other African American athletes, for example Craig Hodges.

Call it audaciousness. It wasn’t just that Kaepernick last season dramatically protested the extrajudicial killings of mostly unarmed black men in this country by police who rarely get charged for their actions, let alone prosecuted or convicted. It was that he chose the anthem as his platform. By kneeling during its rendition, he appeared to mar the package of patriotism the NFL put together over the last half century that helped it overtake baseball as America’s sporting pastime. The NFL juxtaposed itself to the urban sports of baseball and basketball. It became the sport of America’s burgeoning suburbs, where many white families sought solace from rebellion in big cities. As a result, the NFL became the sport of middle- and working-class white America, whose distaste for Kaepernick’s pro-#BlackLivesMatter, apparent anti-police stance, was summed up Monday night in Louisville by the new president who carried most of that NFL demographic.

“Your San Francisco quarterback, I’m sure nobody ever heard of him,” President Trump said of the NFL player who made transcendent news last season. “There was an article recently, it’s reported, that NFL owners don’t want to pick him up because they don’t want to get a nasty tweet from Donald Trump. Can you believe that?”

What I can believe is that the NFL’s coldness toward Kaepernick is not accidental or rooted in analytics, advanced or otherwise. It may not have come down directly from commissioner Roger Goodell’s office, or up from the owners but is some way shape or form is clear to the public eye, it in fact exists.

But the NFL doesn’t have a rule like the NBA’s H-2 under Player/Team Conduct and Dress that demands: “Players, coaches and trainers are to stand and line up in a dignified posture along the sidelines or on the foul line during the playing of the National Anthem.” As a result, a stiff arm in free agency was the only punishment for Kaepernick available to the NFL for his remonstration during its game’s manufactured opening.

Kaepernick is being made an example of by the NFL not unlike Hodges was in the NBA for his fearless departure from the prescribed behavior of athletes, particularly those of color.

It doesn’t matter that there are laws, rooted in freedom of speech, in some places in this country that protect employees from punishment by their employers due to their political views or activities. Washington, D.C., is one such place. California, where Kaepernick played since entering the league as a rookie in 2011, is another. What Kaepernick dared to do was bold and brave, however the NFL may view it as dipping your pen in the company ink.

Unless and until Kaepernick is back in the league under a contract commensurate with his résumé, blackballing is football’s payback